Recently I was recruited as Sangha technical advisor for a new Buddhist ashram to be constructed in the highlands of central Bali. Monasteries can be extremely simple; so with regard to the monastic area of the ashram, the only technical advice really required concerns the formal ecclesiastical precinct, or sīmā. So lately I've been brushing up on the subject of sīmās.
According to the Pali text Vinaya Mahāvagga, in the chapter on Uposatha, monks were uncertain as to how to know whether they were in the same congregation as other monks living nearby—that is, whether or not they should perform formal acts of the Sangha together. They brought this matter to the Buddha, who said, "Bhikkhus, I allow an ecclesiastical precinct (sīmā) to be authorized. And thus, bhikkhus, should it be authorized: First, boundary markers (nimittā) should be announced—pabbatanimittaṁ (a mountain or hill), pāsāṇanimittaṁ (a rock), vananimittaṁ (a forest or grove of trees), rukkhanimittaṁ (a single tree), magganimittaṁ (a path or road), vammikanimittaṁ (a termite mound), nadīnimittaṁ (a river or stream), udakanimittaṁ (any body of water)…." And after this a formal act of the  Sangha is conducted to authorize the new precinct.
There are a few other kinds of sīmā that are more or less "automatic," and do not require a formal act to authorize them. For example, monks living within the boundaries of a village or town may use those boundaries as a gāmasīmā, or "village sīmā." Monks living in a remote forest area may use an automatic sīmā with a radius of seven abbhantaras, an abbhantara allegedly being a unit of measurement about 14m in length. Also, monks completely surrounded by water may use a kind of water sīmā with a radius equivalent to the distance a man of average strength can fling water in all directions. (I once used this sort of sīmā in Yokohama Bay, in Japan; the sayadaw I was with had a boat rented so we could do uposatha inside a valid sīmā.) 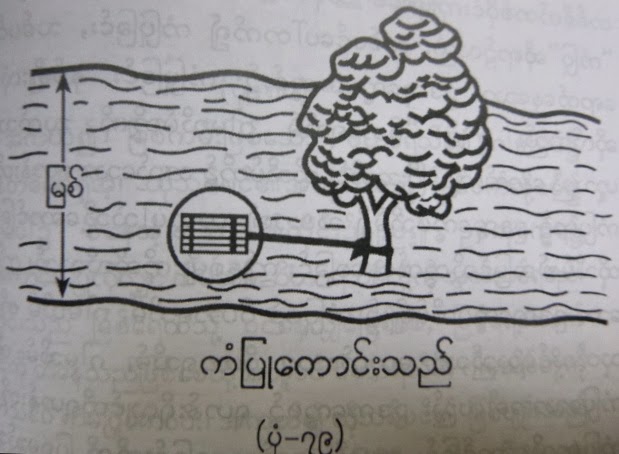 an illustration from ven. U Silananda's book,
showing a kind of water sima
(the circle around the raft represents the sima boundary,
defined by the distance a man of average strength
can fling water in all directions) 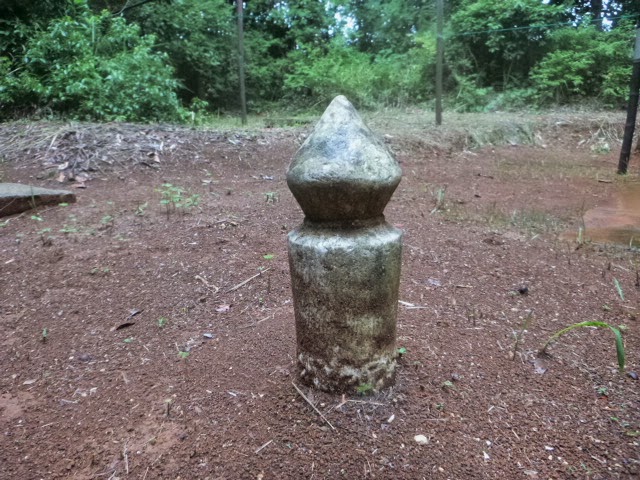 A pseudo sima marker,
showing where the real sima marker is supposed to be