This is another current events post, more or less. Much has happened since I wrote the last one—or rather, much that may be worthy of writing about has happened—so this could be a long one. We'll see how it goes.
In the last installment of the soap opera-esque The Bhikkhu Without a Country, I was spending my 24th rains retreat at a (relatively) quiet forest monastery on the western edge of the Shan plateau, in central Myanmar. For the whole time that I stayed there, about 4½ months, I was in a state of mild depression, or contraction of spirit. My mind is somewhat like the Buddhist cosmos in that it goes through cycles of expansion and contraction, although much more quickly, and with less regularity and predictability than the cosmos at large. Speaking genetically, it runs on both sides of my family; I have a brother and a half-sister who are much more affected by "moods" and bouts of depression than I am. I have heard that what are called mental illnesses tend to be exaggerations of normal, "healthy" mental states; if so, then if my condition were exaggerated I suppose it would be called manic depression, or, as I think it's called nowadays, bipolar disorder. (Why the experts bother to keep changing the names of things like this I don't know. Too much free time on their hands, I guess, or maybe a Western mania for fixing what isn't broken.) When my consciousness is relatively very contracted, I become "hypersamsaric," as I call it: meditation becomes almost impossible, like trying to balance a marble on the tip of a sharpened pencil; reading advanced Dharma books becomes a boring, tedious chore; and I become indifferent (at best) to human companionship, often avoiding eye contact even with people I love, and much preferring to be alone. I'm still open and loving with dogs, though. When I'm very expanded, meditation seems almost effortless, and is often beautiful; overall mindfulness is also spontaneously enhanced, and I may go through brief periods of intense inspiration, even rapture, as though being flooded with Divinity; and my acceptance of members of my own species becomes much greater. Because of these cycles I can sympathize with people, possibly the majority, who live their entire lives in hypersamsaric mode, having no use for Dharma, or even being annoyed by it. And even if they do experience a rare moment of expansion and clarity, like when they are in the middle of a sneeze or are narrowly avoiding a car crash, they have no way of integrating such an anomalous experience into their perceptual Big Picture. This points to one reason why it is so important to practice Dharma even when we don't want to practice it, and to make it a way of life—Dharma practice helps to expand us, and to make contracted mental states less likely. It also provides us with good habits and a fund of experience which are very helpful when contraction eventually hits, and we become less spontaneous and more governed by our habits. Mental expansion is in the direction of YES, and contraction is in the direction of NO. Or, as William Blake's Devil once said, "Damn braces. Bless relaxes."
I'm not sure why my mind was contracted at Migadawun Monastery. My mother dying just a few days before I arrived there probably had something to do with it; although it might not explain why the depression began to lift as soon as I left the place. The neurophysiological explanation that it was simply a chemical imbalance in the brain is likewise not entirely satisfactory. My feeling is that there was something in the atmosphere of the place that I found depressing. It may have had something to do with the venerable sayadaw there. He moved into the monastery more than twenty years ago as a relatively junior monk, eventually became the abbot, and is often the sole resident. Some people dislike him because of the roughness of his personality and his own disdain for the human race in general; and also he has a great appreciation for material possessions, especially high-quality ones, and he doesn't hesitate to ask for them. In addition to custodianship of the Sangha property he now owns his own land, buildings, four dogs (in 2010 he had nine), a huge book collection, water heaters and electric pumps, binoculars, compasses, by his own admission six pairs of gloves, more carpenter's tools than most Burmese carpenters own, etc. etc. And on top of all this, he has difficulty digesting alms food and still likes girls. His monk life has gone stale, so to speak. He seems to have lost most of his inspiration and enthusiasm for the Holy Life—he has lost a sense of wonder. He often speaks of the possibility of his dropping out of the monkhood, and I've been told that he sometimes mentions the possibility of suicide. I suppose his best chance for getting himself out of the corner he's painted himself into and resurrecting his monkhood would be to move somewhere else and start afresh—as the saying goes, a rolling stone gathers no moss—but I suspect that maybe it's too late, and that he is too attached to all the moss he has gathered to bear parting with it. It may be that I was depressed by his whole situation there, and the resultant "vibe" in the air, because I can feel a similar potential within myself; I've never had as much attachment for material things as he has, but I can imagine myself losing that sense of wonder, hitting a Dharmic dead end, and just staying asleep. I don't think being an ordained monastic is absolutely necessary (and in the West it doesn't appear to work so well anyway), but that sense of wonder is necessary.

"The most beautiful thing we can experience is the mysterious. It is the source of all true art and science. He to whom this emotion is a stranger, who can no longer pause to wonder and stand wrapt in awe, is as good as dead." —Albert Einstein

Another possibility is that the contraction was caused by a kind of dissonance arising from a subconscious desire to be somewhere else. I don't know where it would be, though. Maybe someplace I've never been before, maybe never even heard of. I don't know. Another, similar one is that, since Migadawun Monastery is the last place at which I spent a rains retreat in Burma, in 2010, before my Great Experiment of flinging myself into the unknown in America in spring of 2011, going back to spend another rains retreat there, after three in the US, may have felt like a kind of failure, or defeat. But, it's good to consider that life is full of roadblocks and detours; it's like the D-Day invasion: no matter how many snafus and fiascos emerge, it's best to accept them and to continue moving forwards as well as one can. The only guaranteed way of failing is to give up. One may need to adjust one's strategy, however.

"Success is the ability to go from one failure to another with no loss of enthusiasm." —Winston Churchill 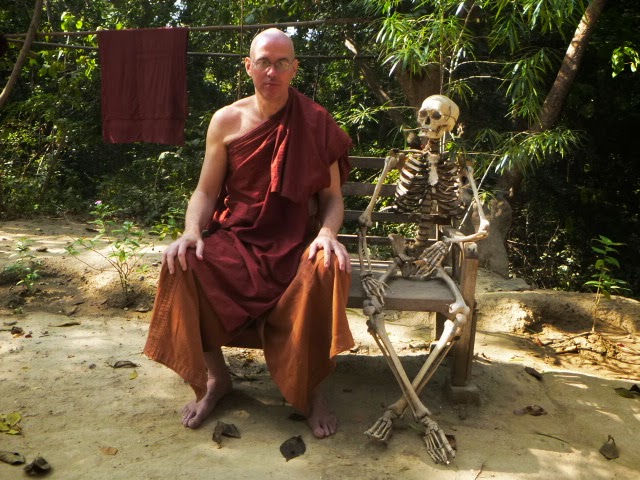 Posted by Paññobhāsa at 7:50 PM