There is an obscure rule of monastic discipline which states that any monk who lives in a forest must know how to use the night sky as a calendar. So, wanting to follow the rules correctly and also wanting to live in a forest, I tried to learn this ancient art. One of the first things I learned is that almost nobody knows it any more, and that information on the subject is hard to come by. I eventually found an old Burmese Sayadaw who specialized in Indian astronomy and had written at least one book on the subject, but it turned out that the Indian astronomy studied by Burmese monks is medieval, not ancient, and thus not the form of it that was mentioned in the ancient Buddhist texts. So, being stubborn and fussy, I kept searching.
Finally I came across an old book at a bookstall on a sidewalk in Rangoon---it was a medieval Indian astronomy text called the Surya Siddhanta, translated in the 1800's by a Christian missionary named Ebenezer Burgess. The text itself was practically unreadable: an English translation of Sanskrit poetry teaching Ptolemaic astronomy with the sun, planets, and stars going around the earth, circular orbits adjusted by epicycles, etc. Who wants to take the trouble of grinding through poetically complicated trigonometry calculations based on an astronomical system that has been obsolete for centuries? Certainly not me. BUT, some of the editorial notes to this edition discussed the Indian astronomical calendar as it existed in very early times, which was exactly what I was looking for. The information in this article is based mainly on those editorial notes, plus information in the Pali texts themselves and my own attempts to make good sense out of all of it.
The ancient Indian calendar, accepted and used by ancient Indian Buddhists, may be interesting to some people, especially to Buddhists with a desire to understand such things (like strict Theravāda monks living in forests), so I am happy to share my knowledge on the subject, incomplete as it is. Anyone able to fill in blanks or to correct mistakes in my interpretation is welcome to contact me, so that any future version of this article may be more informative and useful.
*   *   *
The Indian calendar, and consequently the calendars of other cultures based on classical India, appears to be prehistoric in origin, possibly going back to the pre-Vedic culture of the Indus Valley civilization, one of the earliest advanced urban civilizations known to archeologists. The ancient Chinese and ancient Arabic systems bear remarkable similarities with the Indian, and they are all probably related.
This calendar is lunisolar in that it is based upon the position of the full moon among the stars. A month is a lunar month, lasting 29 or 30 days; and although in later centuries the system was adjusted so that the months followed a standardized system of alternation between 29 and 30, with the full moon day always on the 15th waxing and the new moon day alternating between 14th and 15th waning, in the Buddha's time the full moon day was determined primarily by just looking: if it looked full, it was full. Likewise for the new moon. As a result of this, different communities might have a day or two of difference between their observance of the full moon and new moon days; and the Pali rules of discipline give guidelines with regard to proper protocol when monks disagree on which days to observe them. (Nowadays, because of the later standardized system accepted by the Pali commentaries, sometimes the phases of the moon as officially determined in Theravāda Buddhist countries like Burma are obviously off by a day or two.) On the other hand, even as far back as the 5th century BCE the designated half moon days were already standardized to be always on the 8th day of the waxing and waning moons, regardless of how the moon actually looked.
Because a year of 12 lunar months is only 354 days long, in order to keep the year in sync with the sun and stars an extra "intercalary" month is added every two or three years. In the Buddha's time it apparently could happen at any time of year when the full moon appeared in the same group of stars twice in a row, but in the texts there is a case of a king declaring an intercalary month in Āsāḷha (around July, at the beginning of the monsoon season at the time), and it may be because of this that in Burma, at least, the extra month is always added at this time.
As the month depends upon the full moon's position among the nakkhatta or asterisms (sometimes called "lunar mansions"), the 27 asterisms recognized in the Buddha's time will be described here. (In later times a 28th one was added to fill a perceived gap, plus maybe to make certain calculations easier, but it is unrecognized in the Pali; its Sanskrit name is Abhijit.) I am very rusty on my astronomy jargon, and forget the proper words for explaining the positions of stars in the sky, so the positions of the stars will be described as though one is looking up at them with one's back to the North Star, so the series of asterisms progresses from right to left. A star map would be helpful to anyone wishing to learn these asterisms, plus of course plenty of real-life gazing at the night sky.

The first star named after each asterism above is called the junction star: After the Buddha's time, when Indian astronomy became advanced enough to predict conjunctions (of the moon, planets, etc.) with a fair degree of accuracy, it became necessary to narrow down an asterism to a single point in the sky so that the exact time and place of the conjunction could be determined. Eventually, at least in some systems, the asterisms themselves were reduced to a single star each. But in the Buddha's time astronomy was used mainly just for determining the time of year, and proper times for conducting certain ceremonial rituals. Junction stars seem to have been a much later innovation.
As there are 27 asterisms and only 12 months, the asterisms are combined into 12 groups, the month being determined by the group in which the full moon appears. There is some disagreement in the ancient Vedic literature over how the asterisms are grouped together, however. The Pali months are listed below, with the corresponding asterisms listed by their corresponding numbers in the preceding list:

One detail I was never able to determine was exactly when the transition occurs between one month and the next---does the moon actually have to reach the next group of asterisms? Is there an imaginary line equidistant between them that divides them? Later refinements of the system resulted in the sky being divided into 12 equal portions, which, however, causes some of the asterisms to be in the wrong month. The distance between Dhaniṭṭhā (23) and Satabhisaja (24), for example, is very great, so that the month Sāvaṇa could involve much more than 1/12 of the sky.
At the time that the canonical Rules of Discipline were composed the full moon day was the first day of the month; however, by the time of the commentator Buddhaghosa the full moon day was the last day of the month, and in the modern Burmese calendar the full moon day is the middle of the month. These alterations are largely due to a troublesome phenomenon called precession of the equinoxes. The Indian calendar, being based upon the observed movement of celestial bodies through the night sky, is based upon the sidereal year, the time it takes the earth to pass all the way round the ecliptic. On the other hand, the Gregorian calendar used in the West is based upon the seasonal year, the time it takes the earth to pass from, say, one winter solstice to the next. As it turns out, there is a discrepancy between these two ways of measuring the year, amounting to about one day every 70 years. Consequently, over the past 2500 years the Buddhist calendar has gotten about five weeks out of sync with the seasons. For example, the monsoon season officially begins in Āsaḷha, around the middle of July, but nowadays it actually begins around the start of June; and the coldest time of year by the traditional Buddhist reckoning is approximately the middle of February, but in modern South Asia it is more like the first half of January. The commentarial method of counting the full moon day as the last day of the month largely corrects the difference---except for the full moon day itself, which, unfortunately, is by far the most likely day on the Buddhist calendar for important events to occur, for example the beginning and end of the Rains Retreat.
Precession of the equinoxes is caused by a wobble in the earth's axis of rotation, rather like the wobble of a spinning top that is starting to slow down. One effect of this wobble is that the ecliptic now is tilted slightly differently than it was in ancient times. This may be why there is so little space between the meridians of the asterisms Phussa (8) and Asilesā (9); nowanights they are practically stacked one on top of the other. Another peculiarity of the precessional wobble is that the North Star in the Buddha's time, in Pali Dhuvaṁ, "The Everlasting One," was not the same North Star that we have today. 2500 years ago the North Star was β Ursae Minoris, or Kochab, at the opposite end of the Little Dipper from Polaris, "our" North Star. Which just goes to show that nothing really lasts forever. 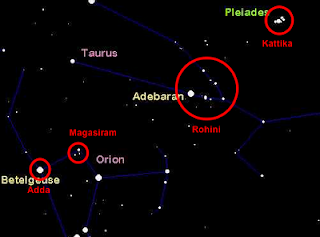