The Simile of the Block of Marble

Imagine, if you like, a block of marble resting in the midst of a barren plain. Since there is nobody and nothing around with which to compare it, we may consider its size to be quite arbitrary. Now, contained within that uncarved block of marble, in virtual form, is every statue that has ever been carved---the Venus de Milo is there, both with and without arms, Laocoön and his sons being strangled by snakes, Michelangelo's David, the plump, effeminate-looking Buddha that sits on the altar in my cave in Burma, etc. etc. Every molecule of stone required for the composition of each statue is already there, already in exactly the correct position; all that would be required to manifest a certain statue would be to remove the extraneous rock. But each statue is already there, completely, in potential or virtual form. Not only is every statue that has ever been carved in there, but every statue that ever could be carved is in there. In fact, an infinite number of statues that could not possibly be carved are in there also, for example, Myron's Discus Thrower with legs as thin as hairs; if it were carved it would immediately collapse, but it's there just the same, and just as real as the others. That one sizeless block of marble contains a literally infinite variety of equally real statues, or "images," one superimposed upon the other; but at the same time it is nothing more than a block of completely homogeneous rock.
Now instead of a block of marble let us imagine a sizeless, dimensionless point or field of infinite energy. (The closest analogy to this in modern Science might be the Big Bang singularity at the very instant the explosion begins, or maybe a black hole---I don't know.) Contained within this infinite mass of formless energy, in virtual form, is every possible configuration of energy, an infinite variety of stable ones and an infinite variety of unstable ones; but at the same time it is really just formless, infinite energy. It may be that an infinite number of these energy patterns are complex enough and reflexive enough to be self-conscious to some degree. (It seems pretty likely to me that what psychologists call "mind" is just a complexified, organized, and finely-tuned form of what physicists call "energy," and that what physicists call "energy" is just an elemental form of what psychologists call "mind": Consciousness=mc2.) We would then have the virtual existence of every possible mental state, an infinite variety of images and experiences, including what I am experiencing now and what you are experiencing now. Self-conscious, perceptual energy patterns might mistakenly attribute a distinct, intrinsic reality to themselves, or to part of themselves, seeing only what their virtual limitations allow them to see, and being oblivious to their true nature of undifferentiated Infinity. It seems to me that only (virtual) perception could make this (virtual) mistake. Bare sensations, along with physical matter, would remain merged in the sea, or dimensionless point, of Infinity, because they would lack the (virtual) wherewithal to mistakenly differentiate themselves. Perception is Samsara.
The Great Paradox is that the aforementioned infinite, absolute, undifferentiated energy, or consciousness, or Everything, is completely indistinguishable, perceptually or otherwise, from infinite, absolute, undifferentiated Emptiness or Nothing, and is thus practically identical to it. The only Western philosopher I'm familiar with who has seriously addressed this idea is Hegel. (I consider his philosophy to be nonsense in many respects, and reading his Phenomenology of Spirit was the most horrible ascetic practice I've ever done as a monk, but this part of his philosophy is, in my opinion, really good.) In an analysis of Hegel's Logic in A Critical History of Western Philosophy, the Hegelian scholar J. N. Findlay says:

Pure being, we are told at the beginning of the dialectic, claims to be the absolute opposite of mere nothing, the absolute absence of any sort of being. It cannot, however, substantiate this claim, since both notions are so void of determinate content that they melt without trace into each other. Only when the notion of Bestimmtheit (determinateness) is added to that of mere being, can the claim to other than mere nothing be substantiated or be more than a mere claim.

Just as size is purely relative, being dependent upon comparison with something else (at least with marks on a measuring stick), so is existence itself purely relative. Despite the unawareness or disdain of most Westerners and Western philosophers concerning this point, the identity of absolute Everything and absolute Nothing is a recurrent theme among the various schools of Mysticism, and appears to be represented to some degree in modern Science---for example, the notorious Casimir effect seems to indicate that empty space contains both zero energy and infinite energy: the math works out both ways. This absolute, undifferentiated Everything/Nothing may be what the Mahayana Buddhists call "Dharmakāya," "Ultimate Source," "One Mind," and much else besides, what the Vedantists call "Brahman," what the Tao Te Ching calls "Tao" (and also, interestingly, "the uncarved block"), what some religious mystics call "God," and what I might be inclined to call in Pali "nibbānadhātu," the element of Nirvana. So the Universe must contain absolute everything in order for it to be nothing at all (and the apparent existence of this world is the greatest miracle and paradox of all); and what we are is essentially a kind of falsely differentiated voidness.
Thus, according to this point of view, the answer to the question "Why do I exist?" or "Why does this or that happen?" is simply, "Because it is possible." Everything that possibly can exist or happen must exist or happen (if not in this version of reality, then in another) in order for the Universe to be infinite enough to arise from Nothing. Thus we do not have to do spiritual practice in order for God to develop through us and become infinite, or self-conscious, or any such thing. Everything already necessarily exists. As Spinoza said, God is completely free because It contains within Itself all possibilities.
The theory also conveniently answers the question of why the universe bothers to exist in the first place.
But what, you may well ask, causes this "falsely differentiated voidness" to seem so real, stable, and intricately interrelated? The answer to that, my friend, is Dependent Co-arising (in Pali, paṭicca-samuppāda). But I won't attempt to explain that here. Even the Buddha couldn't explain that effectively, and according to legend almost remained silent and didn't teach Dhamma because he figured nobody would understand that one idea.
Of course, this philosophizing is rubbish. I seriously doubt that Gotama Buddha would endorse such speculative metaphysical ranting and raving as what I have just produced, except, I suppose, for the Dependent Co-arising part. (In the standard list of the various types of horizontally-moving "animal talk" that monks should not indulge in, the last one is talk of "whether things are or are not real.") We would no doubt be better off if we were sitting in meditation right now, or even just mindfully clipping our toenails. Even so, it is possible occasionally to salvage something useful from rubbish. At the very least one may be reminded that things are not necessarily as they seem, and that there is more than one possible way of accounting for our experience of this world---and the above account, especially the part about an infinite variety of virtual realities being differentiated from one undifferentiated ultimate one, appears at least as logically self-consistent and explanatory as any other, including orthodox Scientism. And if this interpretation of Reality is valid, then the implications and ramifications are literally infinite. Also, remembering "The Simile of the Block of Marble" causes me to experience somewhat less vertigo when I come across such passages in Mahayana Buddhist texts as:

"Form is emptiness; the very emptiness is form." (---Heart Sutra)

"…there are no two such things as existence and non-existence." (---The Tibetan Book of the Great Liberation)

Even orthodox Theravada, committed as it is to the ultimate reality of physical matter, contains within its ancient texts statements that the duality of existence and non-existence is only relative. In fact the Buddhist theory of everything, i.e. Dependent Co-arising, may have been originally based upon this idea. It all goes to show that we should never be too sure of ourselves, or of our beliefs, or of anything really. 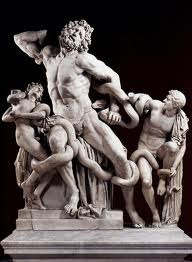 (Laocoön and his sons being constricted by snakes)


It is plain, in fact, that although this notion of mere entity purports to be something wholly different from the opposed notion of absolute nonentity or nothing, it affords no purchase for this distinction....As metaphysical abstractions, the two notions are indistinguishable; we must therefore progress to some notion not so metaphysically abstract. Such a notion Hegel first finds in "becoming," a notion that arises dialectically when we reflect on the transition between our two previous notions....But the dialectical commentator finds logical instability as well as emptiness in this latter notion, and accordingly passes to the stabler notion of "being determinate" (or Dasein), a being thought of as one with a certain quality or determination, and which pertains to a Something set off by its quality from otherwise qualified somethings....That which is, if it is to be conceived at all, must manifest qualitative contrast....

Being determinate is now said by Hegel to lead on to an "infinite qualitative progression"....Each determinate entity seems to be of the quality it is without regard to the qualities that other determinate entities exhibit. The dialectical observer sees, however, that each qualified entity depends for its quality on the other qualified entities which hem it in and show it up, and that it has, in a sense, these others within itself, as conditions of its own determinateness. (---ibid.)

Posted by Paññobhāsa at 6:37 PM