One of Many Middle Paths


"We can never tell how patient or humble a person is when everything is going well with him. But when those who should cooperate with him do the exact opposite, then we can tell. A man has as much patience and humility as he has then, and no more."—attributed to St. Francis of Assisi


The Middle Path, or Middle Way, in Pali majjhima paṭipadā, is a fundamental teaching of Buddhism; and according to tradition it was discovered by the Buddha on the night of his enlightenment, and was the main point made in his first formal discourse after his enlightenment, the Dhammacakkappavattana Sutta ("The Discourse on Rolling Forth the Wheel of Dhamma"), given to the five ascetics who became his first Buddhist disciples.
As it turns out, though, there are many Middle Paths. The Purābheda Sutta of the Sutta Nipāta, for example, sets up a number of pairs of opposites which a good monk wisely passes between. He is not attracted to gain, and has no aversion to loss; he is not opposed to craving, yet he is not in favor of it either; he is not impassioned, nor is he impassive; and so on. In the Aṭṭhakavagga, of which the Purābheda Sutta is a part, it is said repeatedly that a monk should have nothing received (atta) and nothing rejected (niratta), which also obviously is a pun: he should have no self (attā) and no not-self either.
Another good example of this multiplicity of Middle Paths is the Lokāyātika Sutta of the Samyutta Nikāya (S.12.48): In it, a non-Buddhist philosopher called a lokāyātika comes to the Buddha and asks him some questions about the nature of the world. Lokāyātikas, incidentally, were the ancient Indian predecessors of modern scientists; they were not so much interested in enlightenment, or the difference between right and wrong, as in determining natural law and understanding the world in general. In Bhikkhu Bodhi's translation of the Samyutta Nikāya the Buddha's questioner is called a cosmologist. Anyway, this worldly philosopher comes to the Buddha and asks, "How is it, Mr. Gotama, does everything exist?"
"'Everything exists':" the Buddha replies, "That is the oldest philosophy of the world."
Then the philosopher asks, "Well then how is it, Mr. Gotama, does everything not exist?"
Whereupon the Buddha replies that this is the second oldest philosophy of the world.
The worldly philosopher follows up by asking if everything is One—which turns out to be the third philosophy of the world; and then he asks if everything is a multiplicity—which of course is the fourth philosophy of the world.
Then the Buddha says that he avoids such extremes by adopting the Middle Way, or the Dhamma by the middle (in Pali, majjhena dhammo), which he identifies with dependent co-arising. Thus in this case dependent co-arising is a Middle Way which passes between the extremes of existence and non-existence, which is rather a mind-bender, and between the extremes of one and more than one, which is also a mind-bender. (Nāgārjuna's Madhyamaka school, one of the most important and mind-bendy philosophical systems of Mahayana Buddhism, is based upon this kind of thinking.)
However, all of this is some rather dizzying philosophy; and although I'm certainly not opposed to dizzying philosophy, I'd like to discuss a simpler, more practical version of the Middle Path, which is a version of the one taught in the Buddha's traditional first discourse: the Middle Path between self-indulgence and self-torture. The Sutta itself has the Buddha saying this:

By not approaching these two extremes, bhikkhus, the Tathāgata has realized the knowledge of the Middle Way which leads to vision, which leads to knowledge, resulting in calm, in higher knowledge, in full Enlightenment, in Nibbāna.

"There is no spoon"

A fellow at Panditarama
Tried to note all his rūpa and nāma;
He moved in slow motion
And noted each notion
Till he died of hysterical trauma. 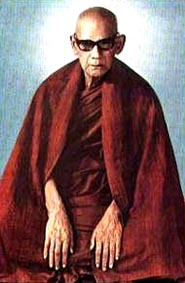 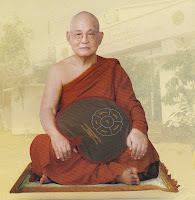 Sayadaw U Pandita, of the Mahasi Tradition

It's Not the Words, It's the Vibration 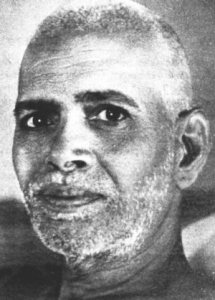 Ramana Maharshi, a very advanced saint and sage,
who worshipped a hill called Arunachala and wrote devotional verses to it,
whose best friend was a cow,
and who blessed and uplifted people while sitting in silence