"Never ask, 'Oh, why were things so much better in the old days?' It's not an intelligent question." —Ecclesiastes 7:10

Last Christmas my good buddy Conor gave me a book entitled The Reign of Quantity & the Signs of the Times, by René Guénon (translated from the French by Lord Northbourne, Sophia Perennis, fourth revised edition, 2004). To this day I am unsure whether Conor considered the book to be great and thought it would be right up my alley, considering that some of its themes/tirades are similar to recurrent themes/tirades on this blog, or whether he found it more or less unreadable and offloaded it onto me with the idea that maybe I could salvage some sense out of it. I can be a cynical bastard sometimes. The correct answer is probably somewhere in between.

Although to the best of my memory I had never heard of Guénon before (sometimes he also went by the alias of Sheikh 'Abd al-Wahid Yahya, and if I had heard that, I'm pretty sure I would have remembered it), he apparently is taken very seriously by many people of the early 21st century, with attitudes both pro and con. It may be, as with his contemporary ven. Nyanavira, that his peculiar interpretation of Reality has more followers (and antagonists) now than he had when he was alive.
Guénon was a Frenchman who eventually moved to Egypt, became an Egyptian citizen, and married the daughter of one of his Sufi teachers there. He died in 1951; and it is said that his final utterance was "Allah." He also studied Hinduism, and was familiar with several esoteric traditions (although he seems not to have been very familiar with Buddhism). The back of the book jacket claims that he was "one of the great luminaries of the twentieth century, whose critique of the modern world has stood fast against the shifting sands of intellectual fashion"—evidently written by one of his more devout followers. Guénon was a philosopher of a very unusual sort, and reading the book has been a truly surreal experience.
Reading his writing is not easy, not so much because of the density of what he was trying to say, but mainly because he composed very long paragraphs and very long sentences. His sentences are often actually three or four sentences strung together with semicolons; so that if one gets lost in the convolutions of a statement and wants to start again at the beginning, one may have to search halfway up the page to find the beginning of the sentence. Here is a rather succulent example:

Indeed, the positive results of cyclical manifestation are 'crystalized' in order that they may be 'transmuted' into the germs of the possibilities of the future cycle, and this constitutes the end-point of 'solidification' under its 'benefic' aspect (implying essentially the 'sublimation' that coincides with the final 'reversal'), whereas whatever cannot be used in this way, that is to say, broadly speaking, whatever constitutes the purely negative results of the particular manifestation, is 'precipitated' in the form of a caput mortuum in the alchemist's sense of the word, into the most inferior 'prolongations' of our state of existence, or into that part of the subtle domain that can properly be qualified as 'infra-corporeal'; but in either case a passage has taken place into extra-corporeal modalities, respectively superior and inferior, in such a way that it can be said that corporeal manifestation itself, so far as the particular cycle is concerned, has really disappeared completely or has been 'volatilized.'

This demonstrates not only his passion for long, complicated sentences, but also his passion for "quotation marks." (Why he didn't put the word "modalities" in quotes, I don't fully understand.) But with regard to his mode of literary composition, a major saving grace is that he wrote short chapters. I much appreciated those short chapters.
The Reign of Quantity & the Signs of the Times is truly an apocalyptic book, well worthy of a place on the shelf between the Book of Enoch and Hal Lindsay's The Late Great Planet Earth. Guénon ingeniously devised a kind of elaborate conspiracy theory, on a cosmic scale. Huston Smith called him "one of the greatest prophets of our time," although Guénon himself would have denied it, insisting that true prophesy is found only in revealed scriptures. He was only predicting, based on the Signs of the Times, and giving fair warning.
Among other things, the book is the most vehement, prolonged diatribe against Scientism—or even plain science, or for that matter against modern civilization in general—the most passionately eloquent condemnation of it, that I have ever encountered. Some critics of Scientism, like Rupert Sheldrake or B. Alan Wallace, point out its limitations from within the context of science itself; and some, like Arthur Schopenhauer or Carl Jung, criticize it from a more uninvolved, philosophical point of view; but Guénon rejected the modern point of view outright, with contempt, and attacked Scientism, and science, and modern society, much as an classical pagan philosopher or medieval Schoolman might. 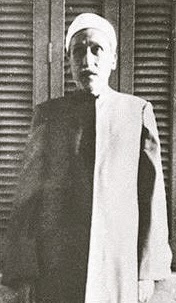 …its chief characteristic is obviously that it seeks to bring everything down to quantity, anything that cannot be so treated being left out of account and is regarded as more or less non-existent….this outlook involves losing touch with everything that is truly essential, in the strictest interpretation of the word; also that the 'residue' that alone comes within the grasp of such a science is in reality quite incapable of explaining anything whatever…

Posted by Paññobhāsa at 3:30 PM