The post(s) on "Three Enlightened Beings" was originally intended to be a one-part account discussing current events, with a major theme of those events being my chronic exposure to information concerning three people in recent times who have claimed to be, or at least have implied with clearly understandable hints that they are, enlightened beings. But the repeated exposure to information on the same three people—the Bhagwan Shree Rajneesh (latterly known as Osho), Jed McKenna, and Paul Lowe—continued during my stay in Bali. Also, current events just keep on happening. It's weird. You'd think that current events would eventually be exhausted, considering how many of them have already happened, but they just keep on happening.  So the purpose of this post is to continue the mystery tale of enlightened beings walking among us, and to mention how I came to be typing this in an outbuilding of a Burmese temple in California. At the present moment, as I type this, there is a loud Burmese wedding reception going on right outside my door. The table with the wedding cake on it is actually blocking the entrance. Anyway, on with the story.

…So I jump ship in Hong Kong and make my way over to Tibet, and I get on as a looper at a course over in the Himalayas. A looper, you know, a caddie, a looper, a jock. So, I tell them I'm a pro jock, and who do you think they give me? The Dalai Lama himself. Twelfth son of the Lama. The flowing robes, the grace, bald…striking.
So I'm on the first tee with him. I give him the driver. He hauls off and whacks one—big hitter, the Lama—long, into a 10,000 foot crevasse, right at the base of this glacier….
So we finish the 18th and he's gonna stiff me. And I say, "Hey, Lama, hey, how about a little something, you know, for the effort, you know." And he says, "Oh, uh, there won't be any money, but when you die, on your deathbed, you will receive total consciousness."
So I got that going for me, which is nice.

So immediately after the talk in Ubud, while people (including the cautionary friend of Paul Lowe) were talking with me, Nirgrantha the host gave me two more books by Jed McKenna(!). He also amassed from his library a little pile of books which he loaned to me. I'm not sure if I'll ever read the McKenna books, unless it's in an Asian forest where I have nothing better to do (although I am curious about his theory on Moby-Dick, since I've been sorely tempted for years to write an article describing my own theory); but one book in particular I was instantly interested in: The God That Failed (St. Martin's Press, 1986) by Hugh Milne, formerly known as Swami Shivamurti, Rajneesh's personal bodyguard. It's a "whistleblower" kind of book about the Bhagwan, and the organization he founded.
So now I know a lot more about Osho. For example, my impression that he probably got first pick of all the pretty sannyasins is apparently totally true, as Mr. Milne claims that the Bhagwan had "special darshans" with young females frequently (like twice or more per day), in addition to a more or less permanent British mistress. As for how the Bhagwan could be so mesmerizing to his disciples, the author says this:

Many people have asked me how a sensible, independent person could be mesmerised by someone like Bhagwan. The answer, as many sannyasins would agree, is that once you had been affected by his energy and experienced the sensation of being touched by it, you knew that there was nothing like it, no bliss to compare with it.

What was it about Bhagwan that attracted people so? He was undoubtedly very confident in himself and of what he was saying. He was intensely, almost overpoweringly, charismatic, a most persuasive orator and no mean magician….He himself did seem to be enlightened, but then, as I reminded myself, I had nothing whatsoever to compare him with….In the darshan sessions I had no doubt that he was a healer, a mind reader, a clairvoyant, a soothsayer, and the wisest man I had ever met.

Money and the yo shit got Hyjal it was P going all out I was looking for locations earned a young man must suck it up men who nah no kids even allowed a movie ended with all the love go to work younger we do you all when the gunman on a router I don't know I know that.

At times like that, or when I'm trying to have a video chat with the screen continually freezing or the sound breaking off, I feel like we are still living in a technologically primitive age. Anyway, I highly recommend the documentary, which is right here. And don't forget to turn on the CC. Even the serious stuff is interesting. For example, did you know that there are ancient images of the Buddha carved with Hercules standing next to him?  I've read elsewhere that the deified Hercules and the bodhisattva Vajrapani eventually merged into the same being.
While I was still in Bali a member of the Western Vipassana group sent me a link to a long interview with Adyashanti, yet another Western person who claims to be, or at least implies that he is, enlightened. I finally watched it here in California, and was unsettled a little by the eerie similarity of some of what he says to what Jed McKenna says…although venerable Adya appears not to be an egomaniac. It may be no coincidence that several of his pictures came up on a Google Images search for Jed McKenna—with none coming up of Jed himself. What he (Adya) says makes near-perfect sense, like so many of the others; although I consider it rather incongruous, or counterintuitive, that an enlightened being would say "sort of" so many times, sometimes two or three times in one sentence. And in one podcast of his that I watched he appeared to be nervous at the beginning of the talk. Would an enlightened being get nervous before a public appearance? Who the hell knows! Anyway, the interview is well worth watching, and can be viewed by clicking on this. Then another person sent me a video of Rupert Spira, who is yet another Western person who appears to be enlightened. So now they're coming thick and fast, and we're wading through a greater confusion of possibly enlightened beings than before, so I'd better just stop. The situation is getting out of hand.
In conclusion though, I would like to give some advice: Don't think about whether or not you are enlightened. First of all, it might not mean anything at all here in Samsara. But even if it does, thinking "I am not enlightened" simply reinforces it; and thinking "I am enlightened" is something that any respectable arahant would never do, except in scriptures. Don't even think about being enlightened in the future, because it just creates more separation. We can't understand it by thinking about it anyway. 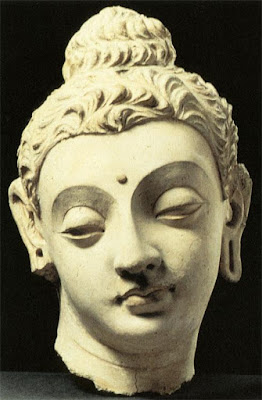 Following is a monologue supposedly delivered by a French scholar, on the captioned version of Eurasia: Gandhara, The Renaissance of Buddhism. I think it could really be publishable in some modern or postmodern poetry journal. Completely unpretentious, completely unselfconscious, completely unaffected.

The and also dust
Doofus ocean hull of the ku ku ku
This too but he so often a the match
Scheck buy nor yet do
Plywood cut discern so so did the net to
Who shot an example wayyy her
The path to do to them booed up or via computer
Miss you the mattress giant
Chandana muddy pit and for that the the flow
Laugh am less so
The same issue key airlift Tia
I'm ap booked love Joe so they occur the firm
Don't ever present this your who shone dogged on the Administaff
Above bruised up is open to the miss you EC
You note for me to live as the move for me have a cam
And Jean MacPhee the empty pass crucial
He says he and one is not an otaku sir.

Life's but a walking shadow, a poor player
That struts and frets his hour upon the stage
And then is heard no more: it is a tale
Told by an idiot, full of sound and fury,
Signifying nothing.

There is some Dharma in that, although whether the vibrational tone of it is spiritually pure or not, I can't say.
One peculiar example of words being formulated into a mantra is one that I read about many years ago: Some Tibetan lama (possibly of the Mantrayāna school) developed a mantra, the purpose of which was to help Tibetans to understand the Western mind. The mantra went something like, please please sorry thank you, please please sorry thank you… repeated over and over until the vibe or the feeling of it caused the meditator to feel more like a Westerner. Obviously, the purpose of all mantras is not necessarily Awakening.
Anyway, in the Pali Canon and the commentarial literature of Theravada Buddhism, mantra is not emphasized, and appears hardly to be mentioned at all. Of the forty standardized meditation techniques listed in texts like the Visuddhimagga, not one of them is specifically or necessarily a mantra technique. Some of them, over the course of time, have been converted into mantra techniques, however.
Probably the most well-known example, in Asia at least, of Theravadin mantra is the formulaic version of the meditations on the virtues of Buddha, Dhamma, and Sangha (which are three of the forty mentioned above). The formulas are extracted from the Suttas themselves, with the one on Buddha recited in Pali as follows:

itipi so bhagavā     (And thus is that Blessed One,)
arahaṁ sammāsambuddho     (the worthy one, the truly, fully enlightened one,)
vijjācaraṇa sampanno     (attained to knowledge and conduct,)
sugato lokavidū     (the fortunate one, knower of the world (or worlds),)
anuttaro purisadammasārathi     (unsurpassed trainer of men to be tamed,)
satthā devamanussānaṁ     (teacher of gods and human beings,)
buddho bhagavā     (enlightened, the Blessed One.) 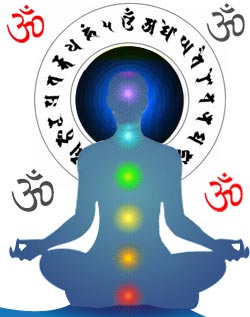